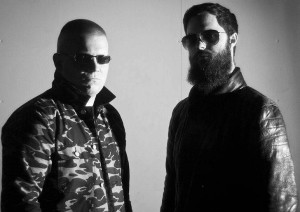 The Demonic Brothers are up and coming Electronic Dance Music artists Murray Wilson, aged 29, and Sean Bickerton, aged 25. Both were born and raised in Coventry, West midlands. The two first met in 2006 through the local music scene,instantly becoming friends they realised that music was to be the driving force of the friendship as well as their shared hunger to create new and exciting dance music. Both Murray and Sean soon realised the potential in one an-others ambitions, their love for EDM and their passion to succeed, however they soon discovered that the road getting there is not an easy one…

Back when they first met, things were more difficult. Neither Murray or Sean were actual producers, they had no means to produce music and soon discovered it would not happen overnight. With them both working full time just to make ends meet, finding the time to write music together was difficult, adding to this difficulty Sean was a full time guitarist in a couple of bands, something Murray had huge admiration for. This was the reason that Murray had decided to get Sean involved in his project, and thus, “The Demonic Brothers,” was born. Soon after meetings began to take place, first at the youth club in the city centre where Sean worked, and at various friends house’s to discuss how they would go about making the idea a reality. The thing that influenced them the most, and what they were aiming to do with The Demonic Brothers was to create a live band using real instruments to give them the edge they so desired. Both Murray and Sean loved to DJ in their spare time, often performing sets at house parties. The performance aspect of being a live EDM DJ was something they both agreed was also an essential part of The Demonic Brothers future.

Murray had wanted to make music as long as he could remember, being hugely inspired in the 90’s by the band “The Prodigy”. Their ability to merge all genre’s of music and make something even more incredible, a super genre, was alone, enough to inspire him. Murray’s influence did not just come from there, through out his life he was inspired by virtually all artists from many genre’s. Pure and simple, he knew that one day he would do something similar. Becoming friends with Sean and seeing his skill was one step closer to realising a dream.

Sean was a late bloomer in his love for electronic music and didn’t really discover it until his late teens, having spent most of his early life listening to bands such as “Black Sabbath,” “W.A.S.P,” and “Megadeth.” After picking up the guitar aged 13, he knew that he wanted to perform live, with his first gig at the tender age of 14, his thirst for bigger and better things began. Sean has had some success with his band “Finish Him!” and their first album receiving great reviews in the music press. In 2006 Sean heard a track by seminal dance producers “Noisia,” called “Sacrifice,” and instantly his musical perceptions changed, all of a sudden electronic music became a major focus and he quickly took up DnB mixing using his friends decks. A couple of months later he meets Murray and the idea of creating a live dance band starts to form.

By 2012 both were finally in a position to start producing. The two of them had managed to get better jobs, giving them more time and money to pursue their dreams. Hence it was not long before they started making tracks, getting noticed and creating a buzz in the local area, through friends, via social media and so on. This alone to them gave them the inspiration to take things to the next level, getting a track released on a label. It’s 2013 and its happened, The debut single by The Demonic Brothers, called “Lose Control,” on Element Recordings