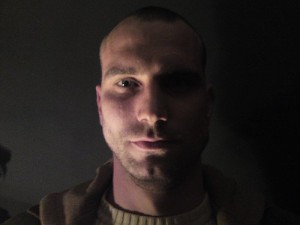 In 1998, after years of hard working and saving money, Ronald Eikenbroek bought his 2 Technics sl 1200 turntables and a simple mixer.
After working with just 1 turntable and cutting and pasting tapes he could finally work with the real deal.
As dj V-ruz he organized and played at several Hardcore/Gabber party’s.
After years of dj’ing it couldn’t take long to start making music of his own and so he did.
In 2002 he also started a course for sound technician and worked as a technician at concerts, party’s, etc. where he learned a lot about fx, mixing and soundcreation.
His passion and curiosity in electronic music kept on growing and made him look further than the hard electronic music like Hardcore/Gabber.
Under his own name he started spinning and making Techno and Techno related music.
Even now he is still searching for new genre’s and widening his musical preferences.
Expect more than just one style from this dj / producer.
His motto is…..don’t be a prisoner of 1 style !!