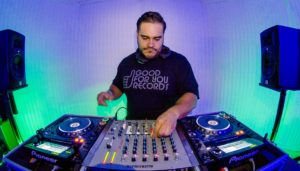 Inspired be some serious East Coast Legends, Nino Bellemo’s passion for music has taken him around the globe, Self taught as a producer he has worked with some of the most influential names in house and techno music.
DJ/Producer Nino Bellemo is no stranger to music, raised with a hispanic background mixed with American Culture; Nino’s musical ear has been influenced by the rhythms of House, Hip hop, Rock, Orchestras and Latin beats that have made him the Artist that he musically expresses. Most significantly, the biggest influence in Nino’s music making began in the early 2000’s when Nino had an unfortunate accident that injured his back and was bedridden that year. Since day One after surgery, Nino has not looked back and has been writing and creating music experiences for all dance floors.
Nino’s own unique sound is becoming an important purveyor of international, underground house and techno. Supported by the likes of Roger Sanchez, Tom Stephan-(Superchumbo), Oscar P & Paul Johnson to name a few. Nino is an artist to keep on the look out within the coming year as he introduces he Friendly & Funky style which has already been featured on UK’s finest VMM Magazine along with monthly special guest radio shows; Deep Sound.fm(London), Club radio NYC (New York) & Bondi Beach Radio_with_Bobby Blaze (Australia).