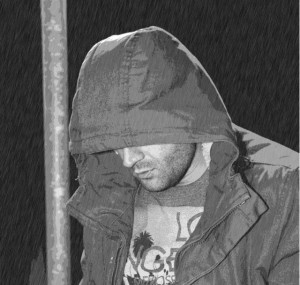 From the moment Louis invited us into his home and his studio where the interview was taking place we got a sense of welcoming and warmth from a very interesting, cool and laid-back character.
Very well groomed himself and his surroundings very particulate and a feel of perfectionism in his belongings and environment.
Louis offered us some Orange juice, which looked more red then orange. Blood Orange I thought to myself.
But as we sat down and got ourselves comfortable ready to start, Louis flicked on some classical music, pulled out what looked like a meat cleaver from a holder in his trousers, placed it on the table in front of us, sat down, slammed a tequila (This was 10am!) and told us to proceed.
I could tell this was gonna be a long morning!

It was obvious from his early days Louis was destined for great things in music, with an obsession with his dad’s collection of Vinyl’s, wearing massive headphones to listen to them and sitting there for literally hours!

Started his music career on Vinyl decks back in 2002. Had quite a collection. Was a crowd pleaser and would strive to get as many mixes as he could “Poppin”!

He would continue to go to the clubs as he always did to see his favourite headliners, but became more engrossed in the sound of the music, the feel, the style, the selection, the mixes and even the production. He became an obsession and his club scene as a reveler started to not seem as exciting and spontaneous as it once was, it became more of a University of Music.

Louis then Started experimenting his production skills in a friends recording studio around 2003/4.

In 2008 he moved with the times and onto CDJs, evolving into the ever growing House Music scene.
Setting up Proud Sound Productions which is now re-branded as just “Proud Sound” and is a registered established limited company to date.

Being Signed to Ministry of Sound, most notably with “Zombie”. Released via Hed Kandi Records.
But with a style change/adaption, MoS wasn’t quite as fitting or easy to continue working with.
So along came the underground house sound and after only under a year his first major record deal within that scene too. Sigining a trademark track of his in style and name, “Interview With DaVinci”, Licensed exclusively to Spinnin’ Records. Released with them singly and on their Spinnin’ albums.

He then went on to play at Godskitchen in the main room alongside Gareth Emery, plus again main room action alongside James Zabiela for Ec-lectricity.
Hosting his event brand “PROUD” at Coventry’s leading and award winning bar in 2010, then onto London with PROUD at the infamous “Lightbox” and also hosting the Roof Top bar Es-Paradis, Ibiza!

Events have since been less of an interest and priority for Louis & his Proud Sound branding image, spending more valuable time in the studio, upgrading his home studio with acoustic installation and instruments. Learning to play the guitar as he once did at 10 years old!

Louis likes to make most of his music based on original ideas with the odd bit of influence from certain past or present music. But he is a DJ, songwiter, producer, composer & engineer. Even has been known to sing a little or use his own vocals in some of his tracks.
Louis has music signed to:
Dual Life Records
Ministry of Sound
Hed Kandi Records
Spinnin’ Records
Baroque Records
Freshart Music
Twisted Frequency Recordings