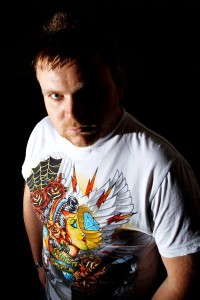 Dave Crane is an intern ational award winning DJ, Producer and Presenter currently based in Leeds. Starting his DJing career in the late 90s, having been influenced by the early rave days, he began with spinning Happy Hardcore and Jungle and from there moved into House, Garage and Trance. He mastered his skills playing at numerous house parties, bars and smaller clubs around his home region of Essex. Dave now plays across the board House and Techno.
In 2000 Dave moved to the clubbing capital of the UK, Leeds. Together with fellow DJ Tom Fearn he formed The Funky Fellas. The duo played House music across the spectrum, through to Techno and into Breaks and Old Skool Rave. Their unique style proved very popular with the local crowds who could be seen bouncing along to the DJs energetic perfor mances. Riding a wave of success, the duo played for many big events including Gatecr asher, Euphoria, One Love and Base. Their biggest achievement was winning the DJ competition at Plastik Records in Ibiza in 2003.
Since the split Dave, has appeared on line ups alongside some of the biggest names in the industry, such as James Zabiela, 2 Many Djs, Carl Cox, Mark Ronson, Annie Mac, Lisa Lashes, Judge Jules, Marco V, Zane Lowe, Danny Rampling, Example, Jaymo and Andy George. He has played for promoters such as Ministry of Sound, Pacha, Gatecr asher, Euphoria, Warehouse Project, Judgement Sundays, Secret Party Project, Echo and Retro to name a few across countries like Denmark, Amsterdam, Portugal, Ireland, Greece and Ibiza.
The biggest accomp lishme nt in the talented DJ’s career to date is his winning of the Bench and Mixcloud DJ Competition which he entered in December 2010. He beat 1000s of other brilliant DJ’s from all over the world based on tune selection, mixing ability, crowd reaction and personality behind the decks.
Since then he has played all over the UK for various promoters and Bench events. He has mixed an exclusive Dj Mix for the Grammy Awards in the USA, been taken on by a new Promotions company and has released numerous records and remixes on labels such as Endemic Digital, Sounds of Juan, Plastik Philosophy, Kushtee, Smash, Zipped, Tactal Hots, Bloxbox, Line Out and Tonic with more in the pipeline.
Some key highlights have been his debut single Blade Running, which was supported by a huge host of Djs and reached the Top 10 in the Dj Download Charts and also remixing for Sterling Void! Support of his productions and remixes come from Richie Hawtin, Claude Von Stroke, Alex Kenji, Andi Durrant, Chris Lake, Robert Owens, Scumfrog, K Klass, Brandon Block and many more.
In January 2013 the show was picked up by a large commercial station Chart Mix Radio where Dave now hosts a specialist Dance show every Thursday night 6pm after the success of his House Mates Show which featured mixes from M.A.N.D.Y, Agoria, Timo Garcia, Santos, Larry Tee, Mark Mendes, MYNC and Jonathon Ulysses to name a few!
Dave has also set up a new record label in January 2013 called Sweep The Floor Records and is already getting tipped as a top quality Dance music label! Having releases and remixes from the likes of Tim Lyall, Tim Le Funk, Wainscott and Remco Geerts, In January 2014 his Trance inprint Soaring Sounds Records was created and now managed by Billy Rutts.
The future is looking hot for Dave so why not be a part of this Star of the Future!