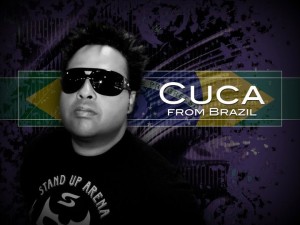 Dj Cuca started his career as a Dj when he was only 14 years old. At the age of 16 he started to make megamixes and remixes for Brazilian radio stations. As producer, cuca began his career producing Rap and Hip Hop in Brazil in the early 90’s. Cuca was one of the Top DJ Producer who started the Rap and Hip Hop scene in Brazil, producing the major groups of Rap & Hip hop of the time.

Then In Brazil the musical and Phonografic market was growing. As Cuca always played as DJ and its musical selections at the time was playing various styles than Cuca started to expand his musical knowledge and began producing other styles as: Pop , Pop Rock, Reggae , R&B .

That was the moment when Cuca really has in the electronic scene. Cuca was and is a DJ Producers Of more respected by the Majors Records that more did remixes for International Artists being a Dj Producer of Brazil. Cuca made remixes for many consecrated artists such as Shaggy, Inner Circle, Celine Dion, Laura Pausini, Gary Barlow, Toni Braxton, Lauryn Hill, Wiclef Jean, Shakira, LighHouse family,N Sync,Andreas Buccelli, Amadeo Ming,Rick Martin, Donato & Stefano, All Saints,Thalia and much more…
Today Cuca had Tracks Playing by Top Dj’s Around The World!